bring: An object that allows you to see/experience something invisible
(invisible in its most broadest terms)

Realists of a Larger Reality; (Ursula Le Guin)
Perhaps the only futures worth considering now are unlikely ones? Maybe we need more of them? Design’s current methodologies prepare us for the probable, and as we have seen, this may not be enough.  Perhaps we need to be more comfortable with the unlikely, improbable and barely imaginable.

The impossible can become the new possible —  just because something is impossible does not mean it is not possible. Perhaps less linear design processes can allow for wider influences and reference points providing a richer pool of cultural nutrients — perhaps then more humane realities can begin to emerge…, 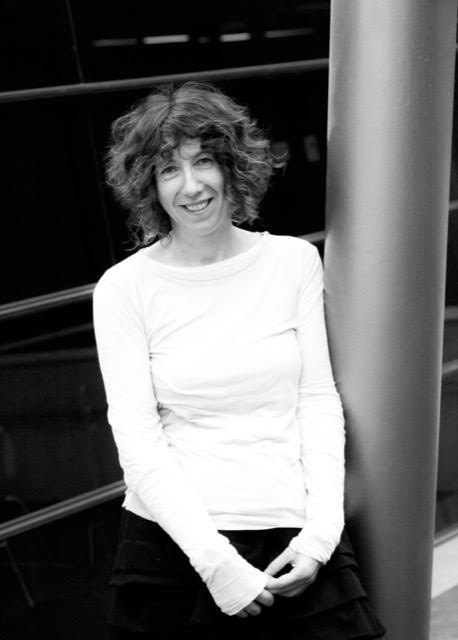 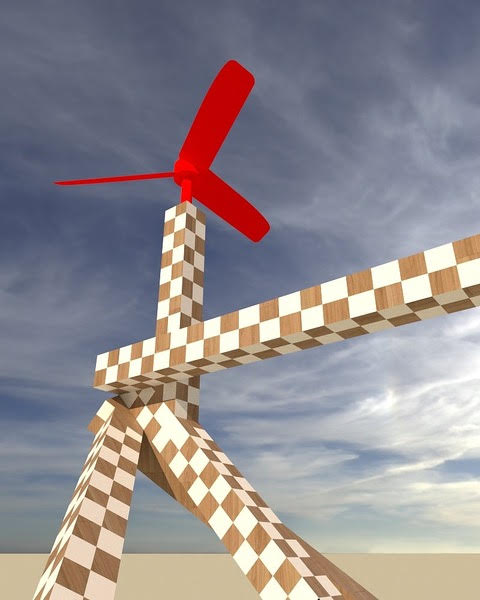 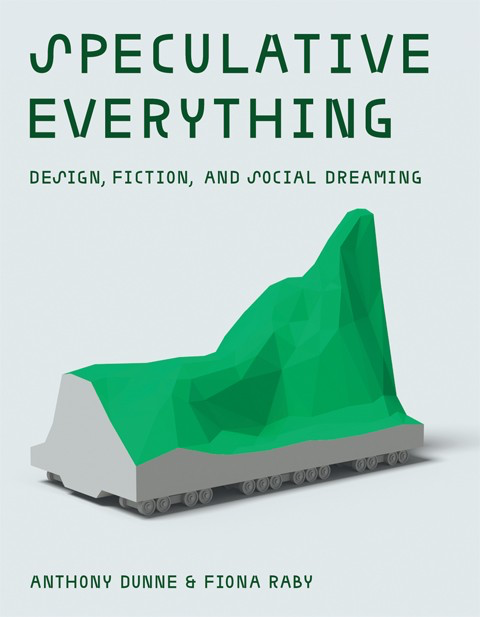 Fiona is University Professor of Design and Social Inquiry and Co-director of the Designed Realities Studio at The New School in New York. She is also a partner in the design studio Dunne & Raby (1994-).

She was Professor of Industrial Design (id2) at the University of Applied Arts in Vienna between 2011-2016 and was Reader in Design Interactions at the RCA between 2005-2015. Her projects with Anthony include Technological Dream Series, No 1: Robots (2007), Designs For An Over Populated Planet: Foragers (2010), The United Micro Kingdoms (2013), The School of Constructed Realities (2015), and An Archive of Impossible Objects (2019 -).  She was a founding member of the CRD Research Studio at the Royal College of Art where she worked as a Senior Research Fellow leading externally funded research projects. She taught in the Architecture department for over 13 years; ADS04 is the longest running unit, now 19 years old. 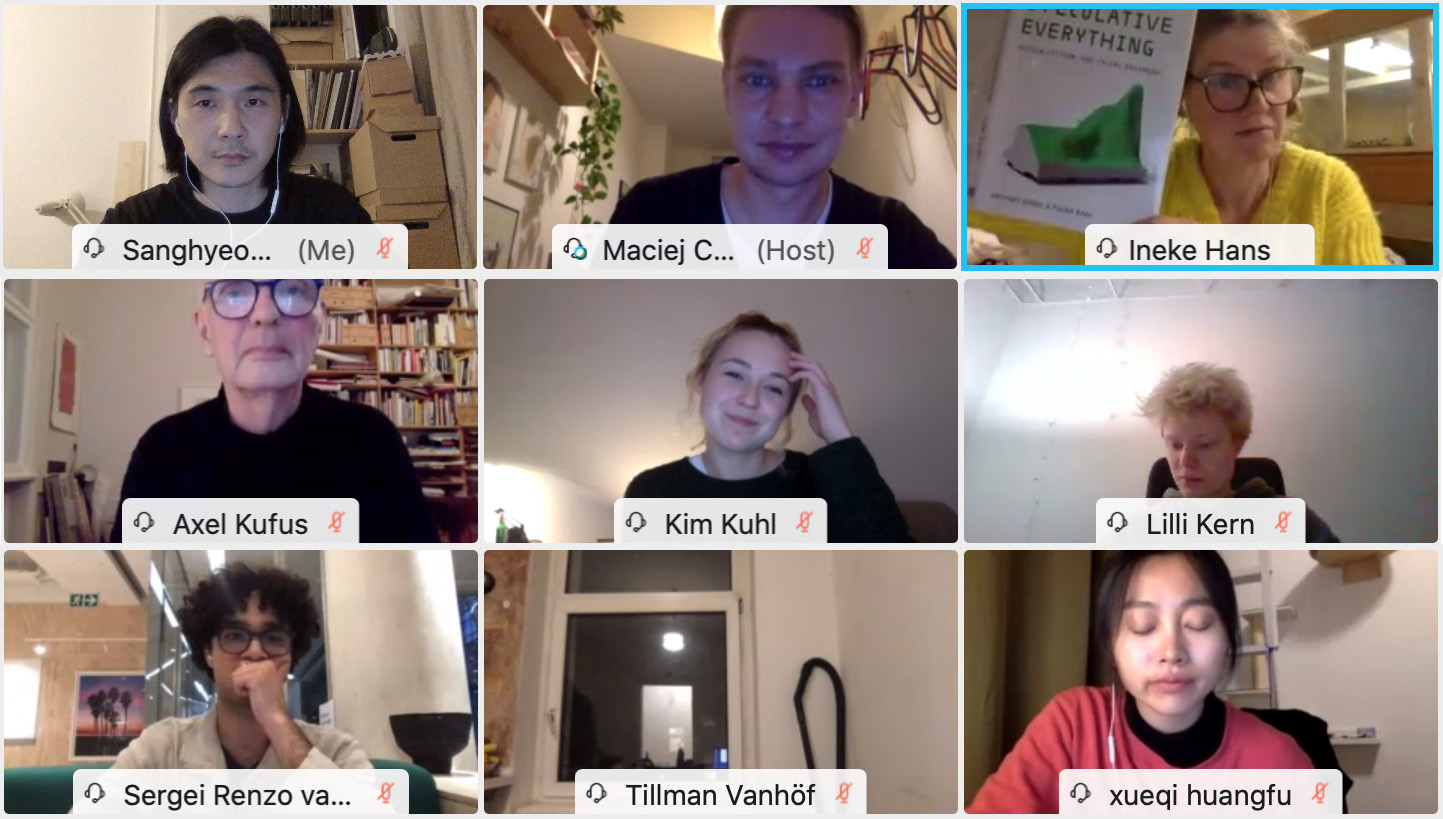 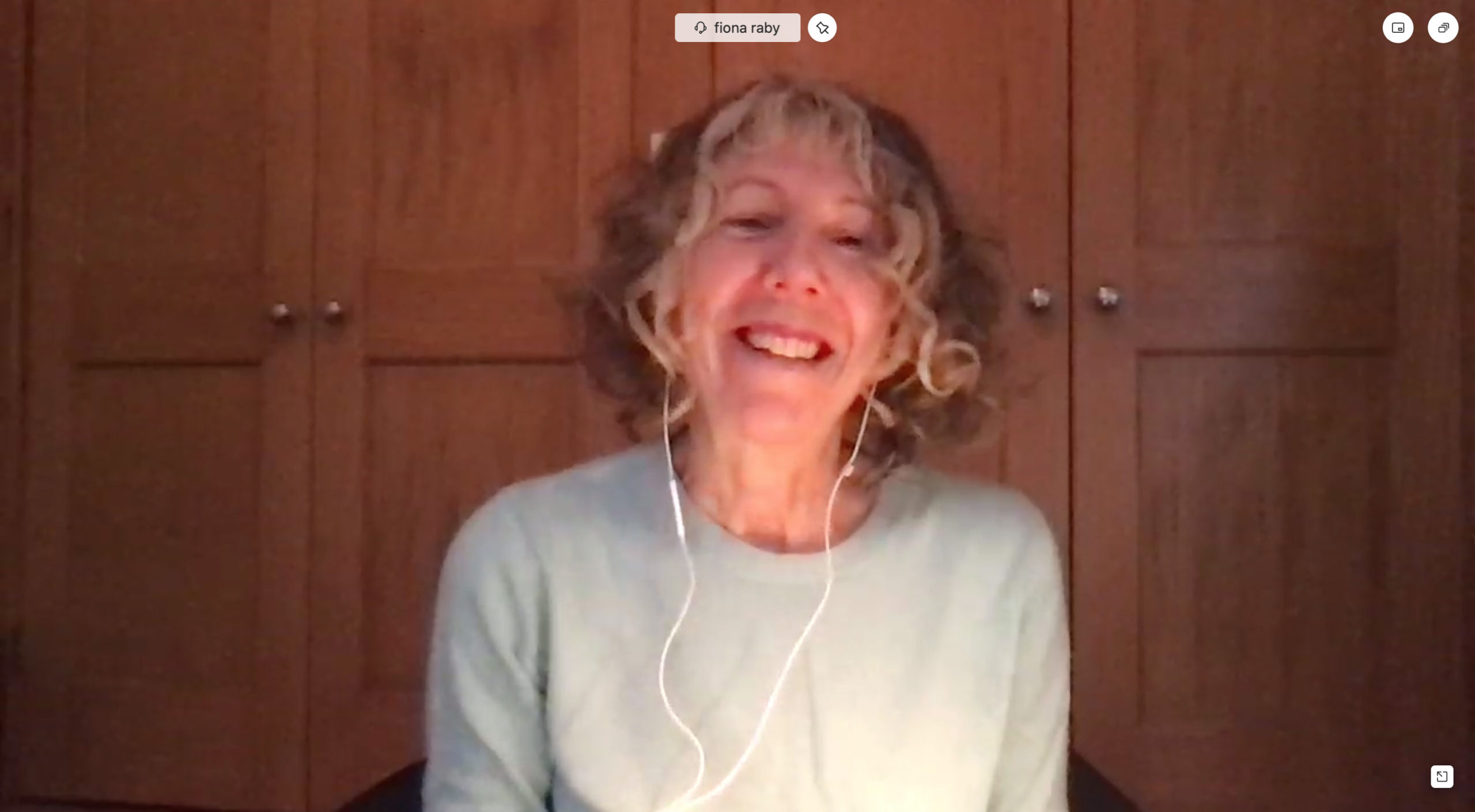 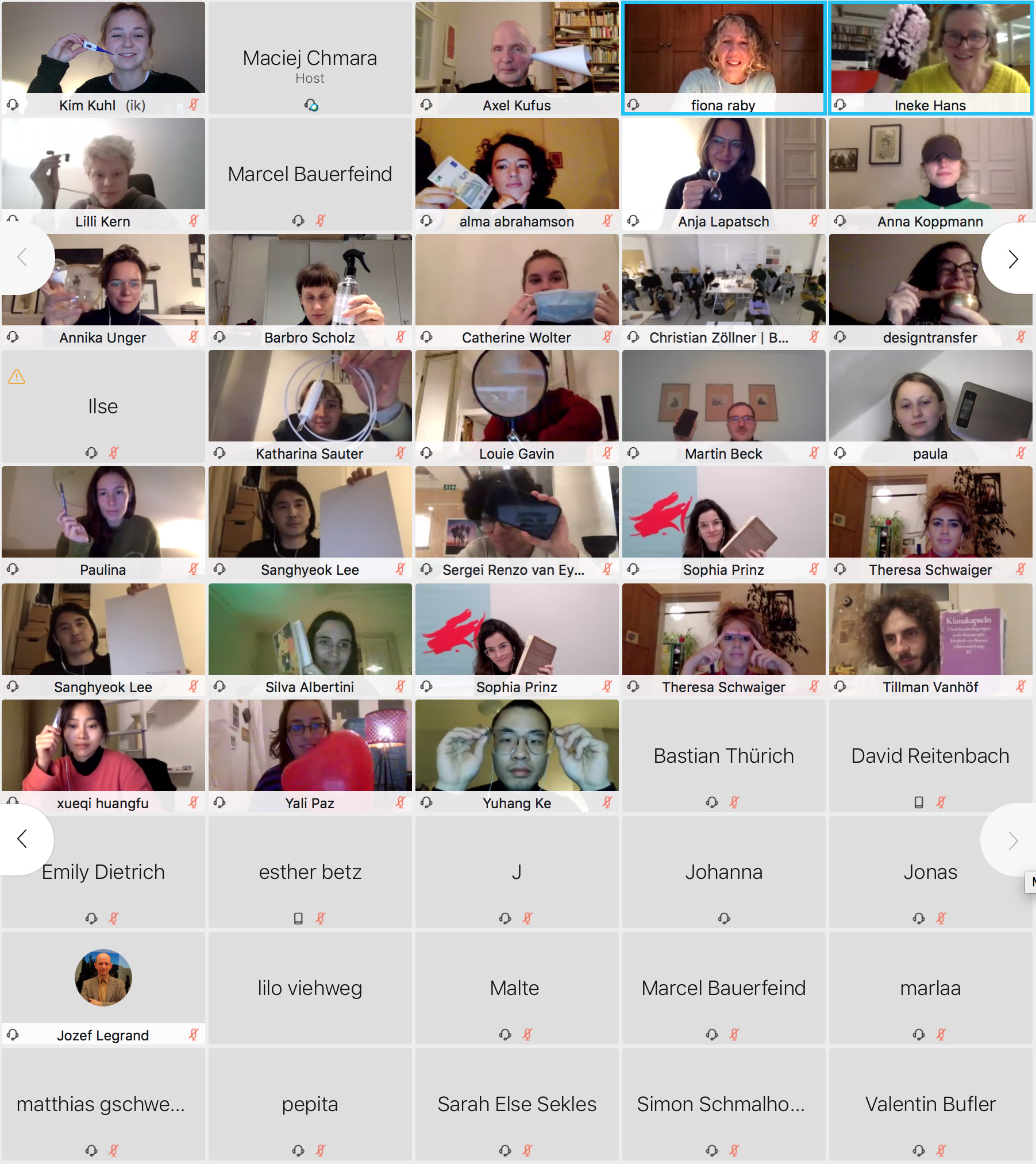 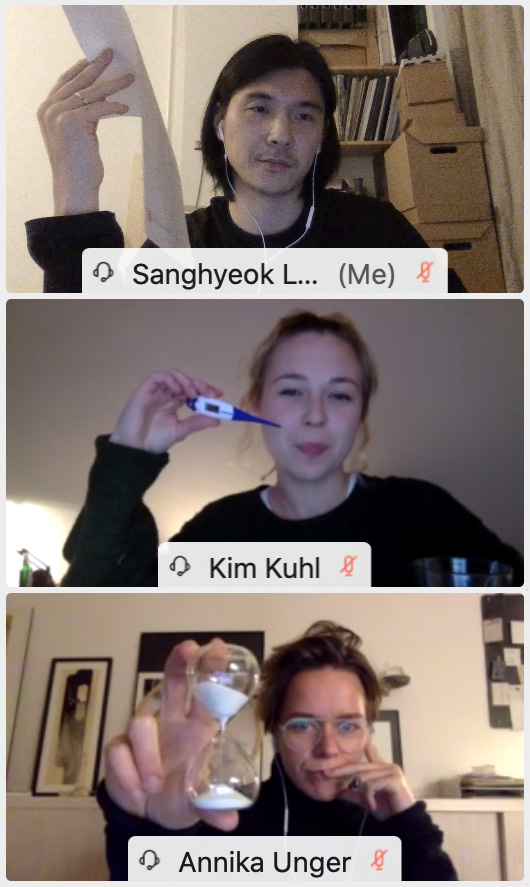 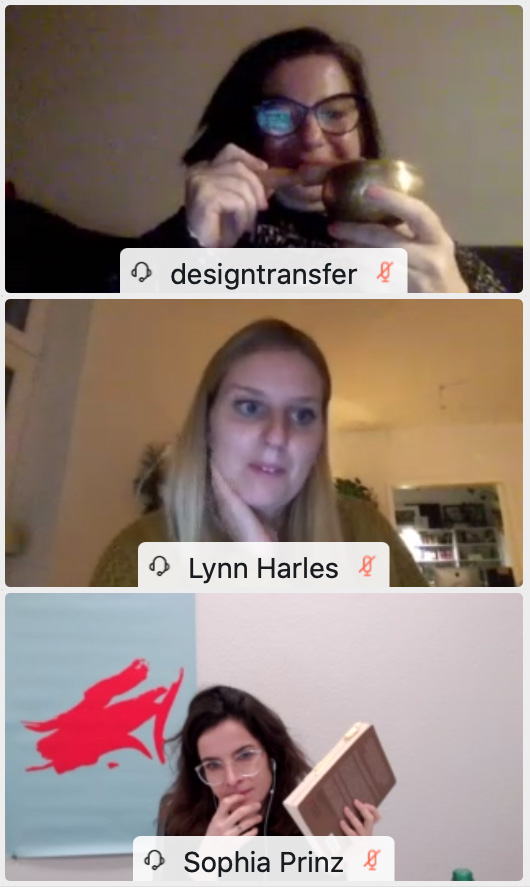 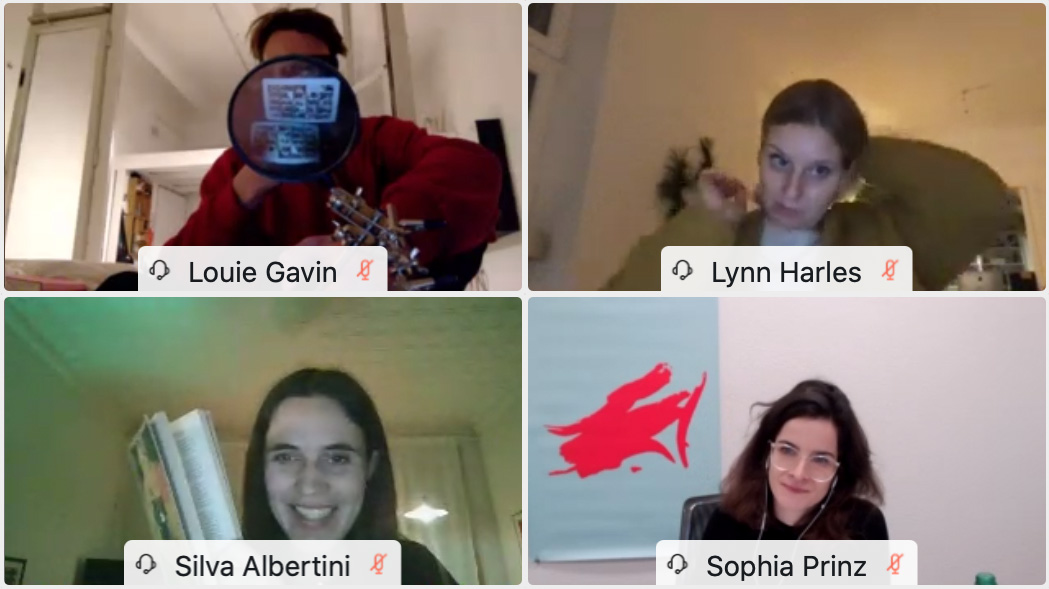 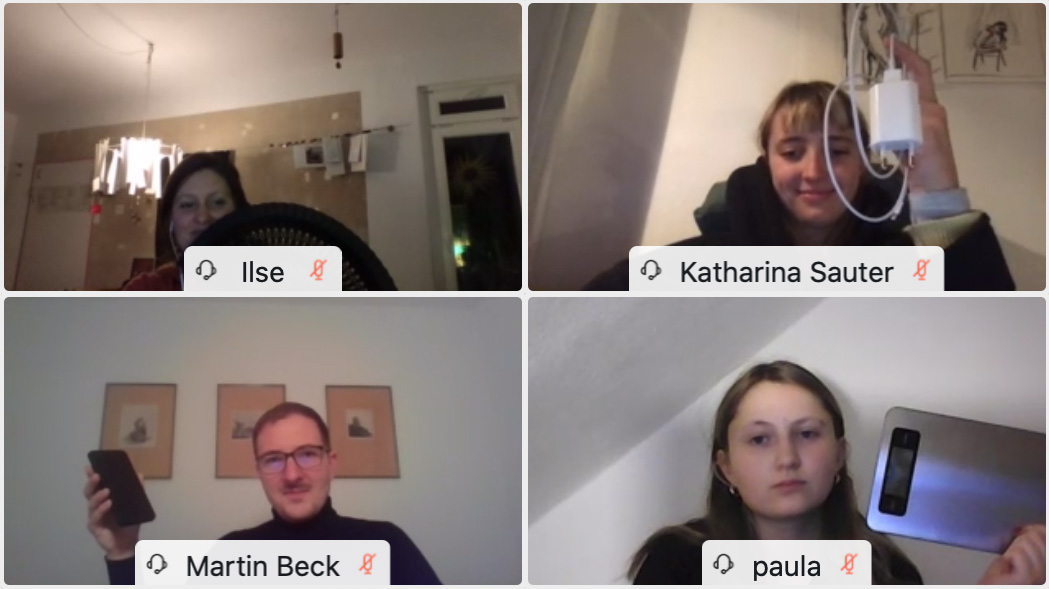 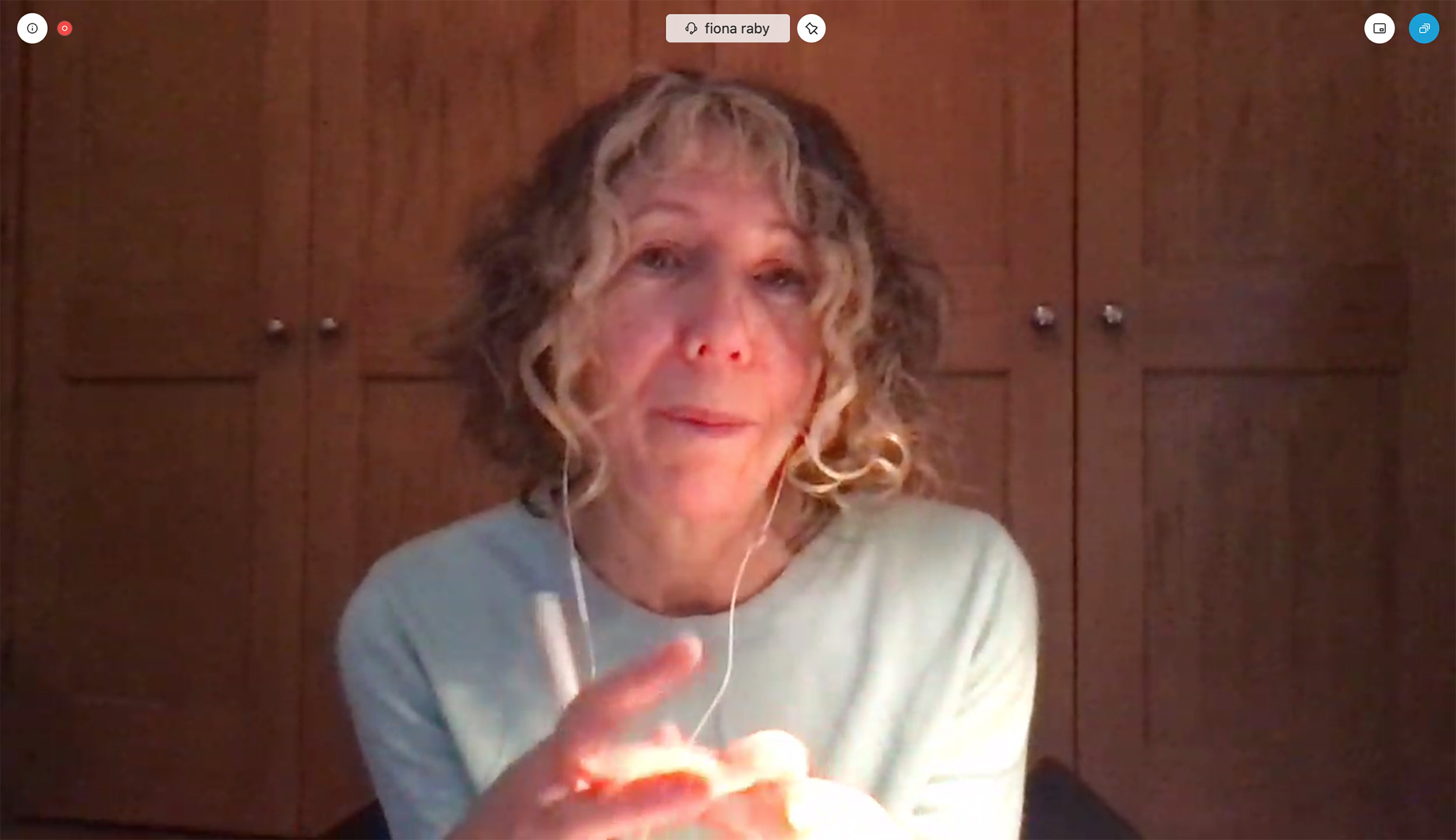 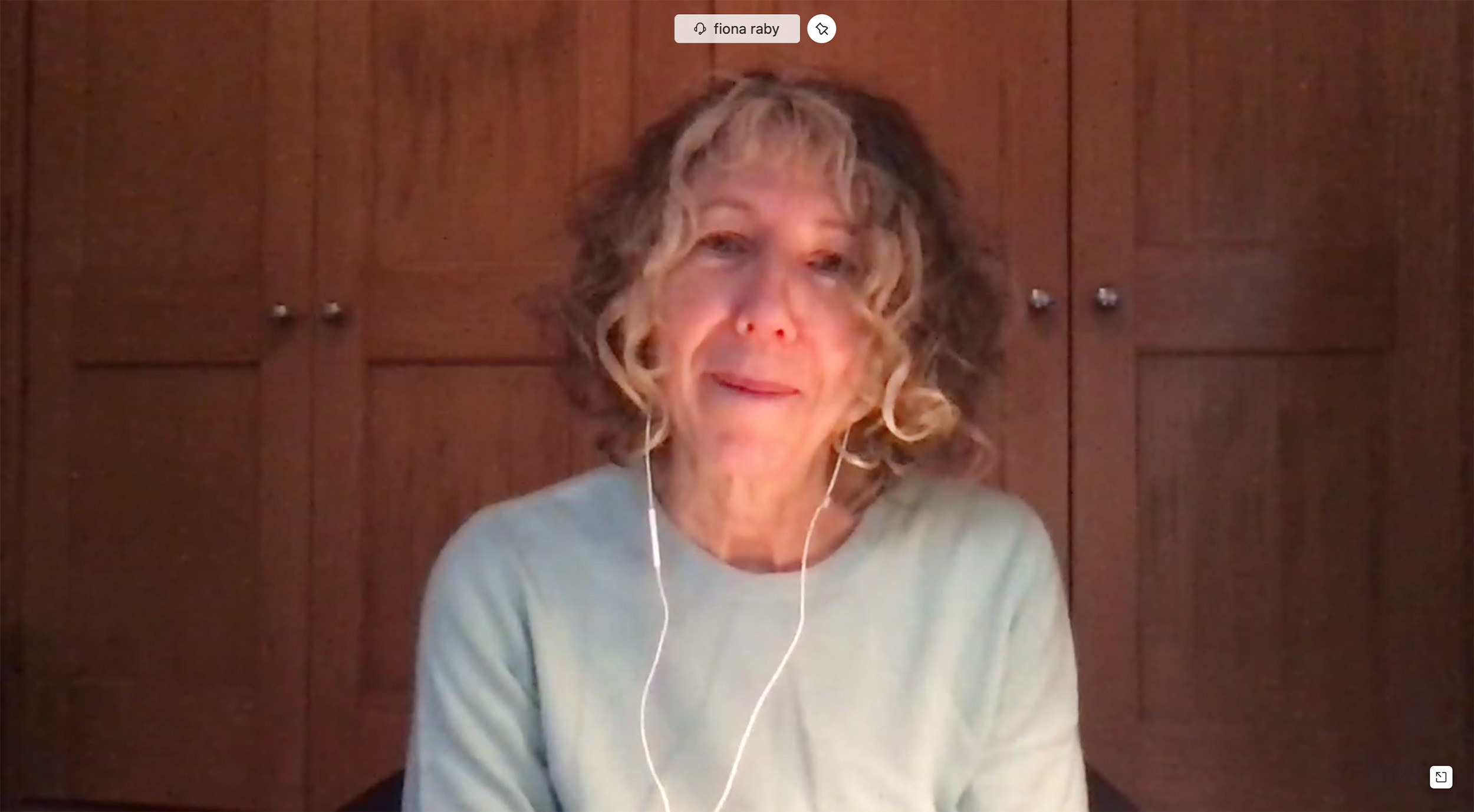 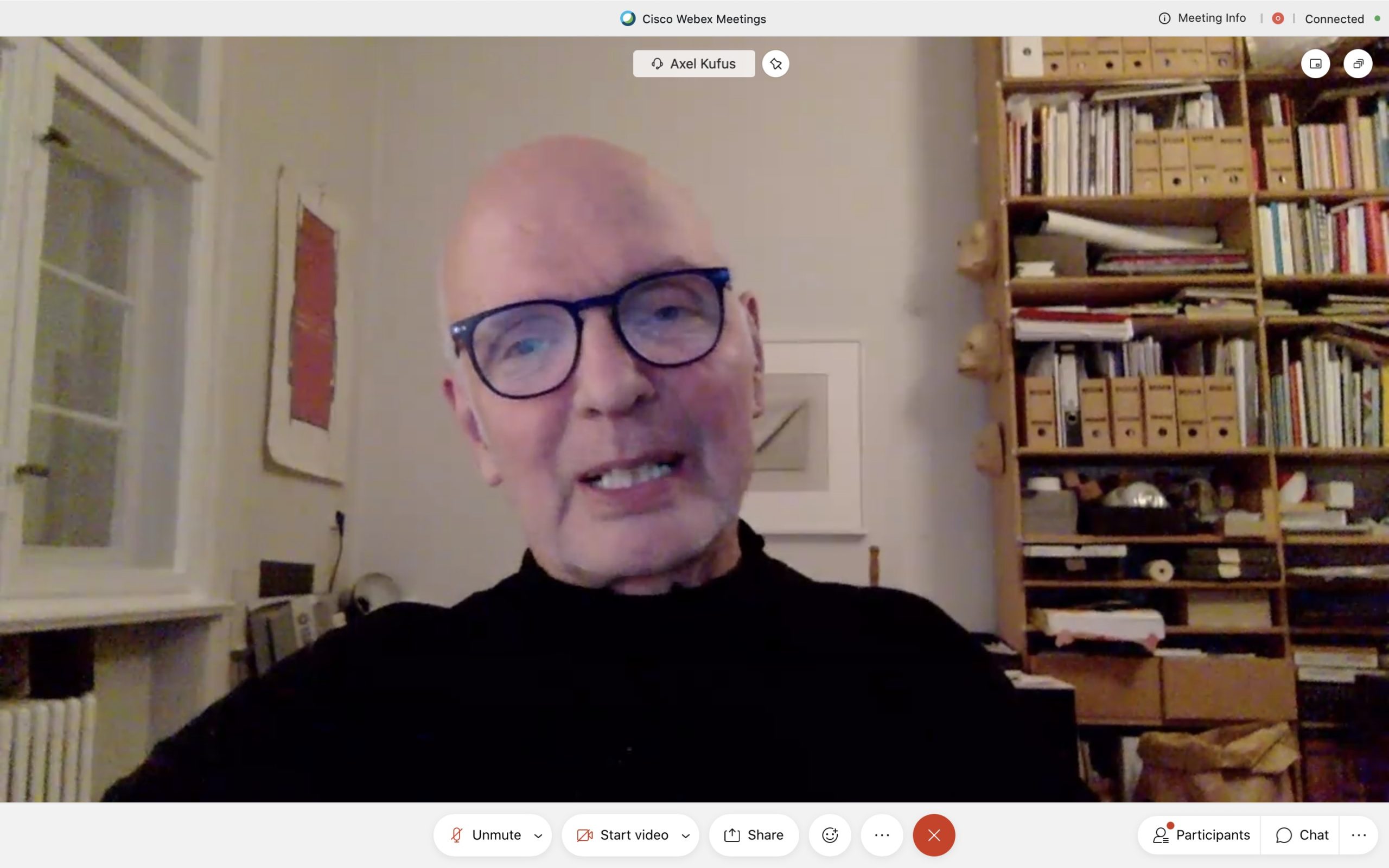 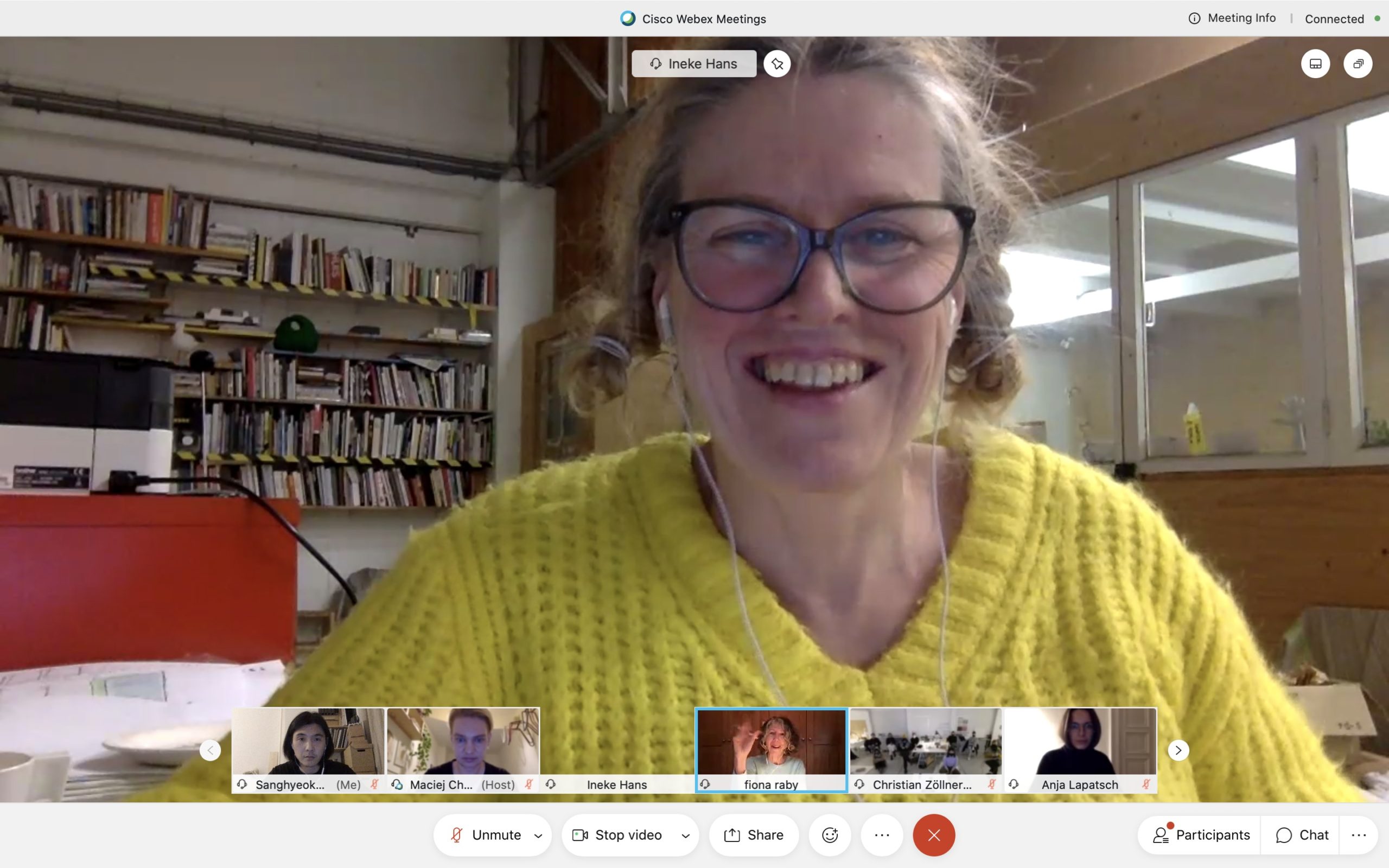 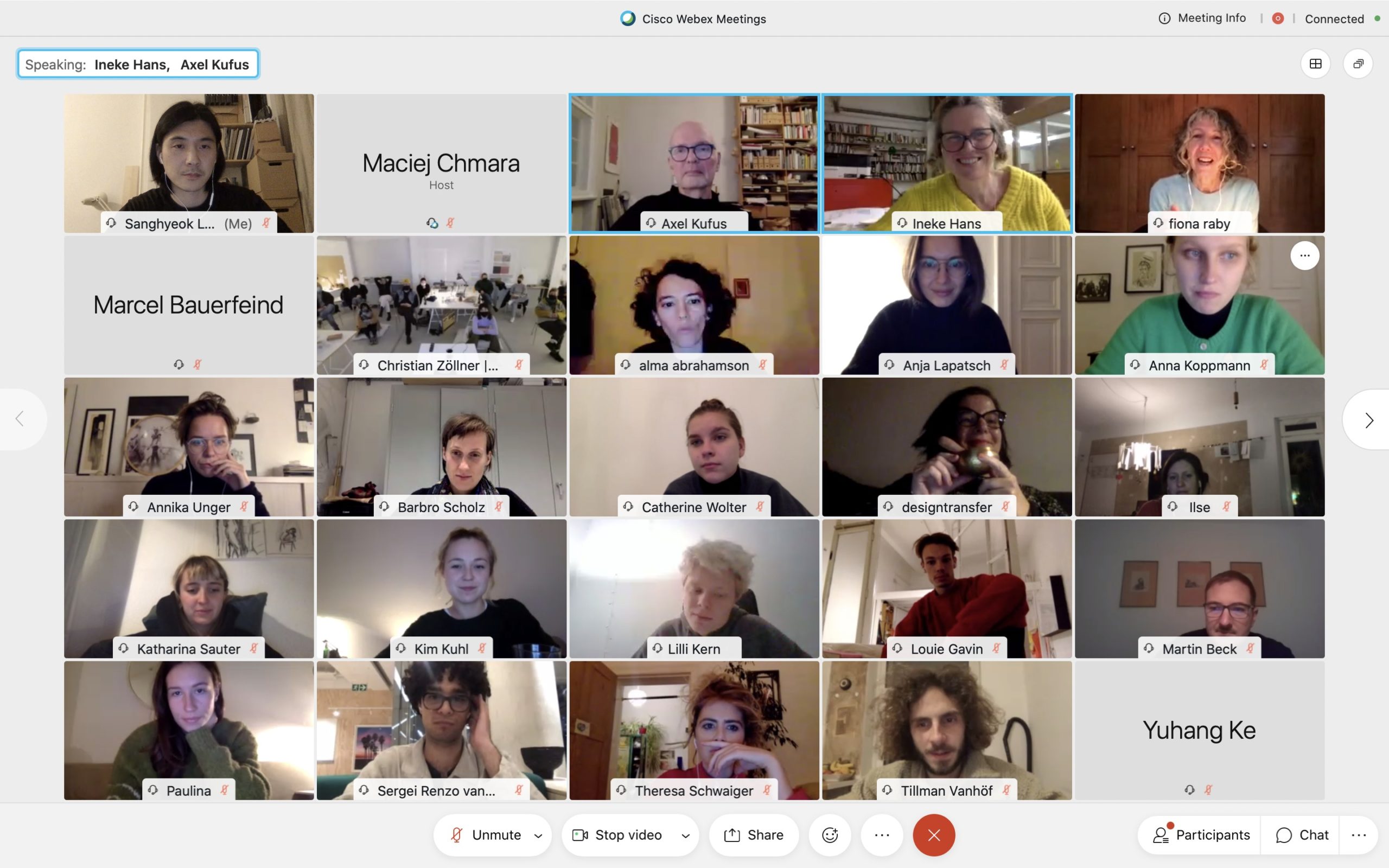 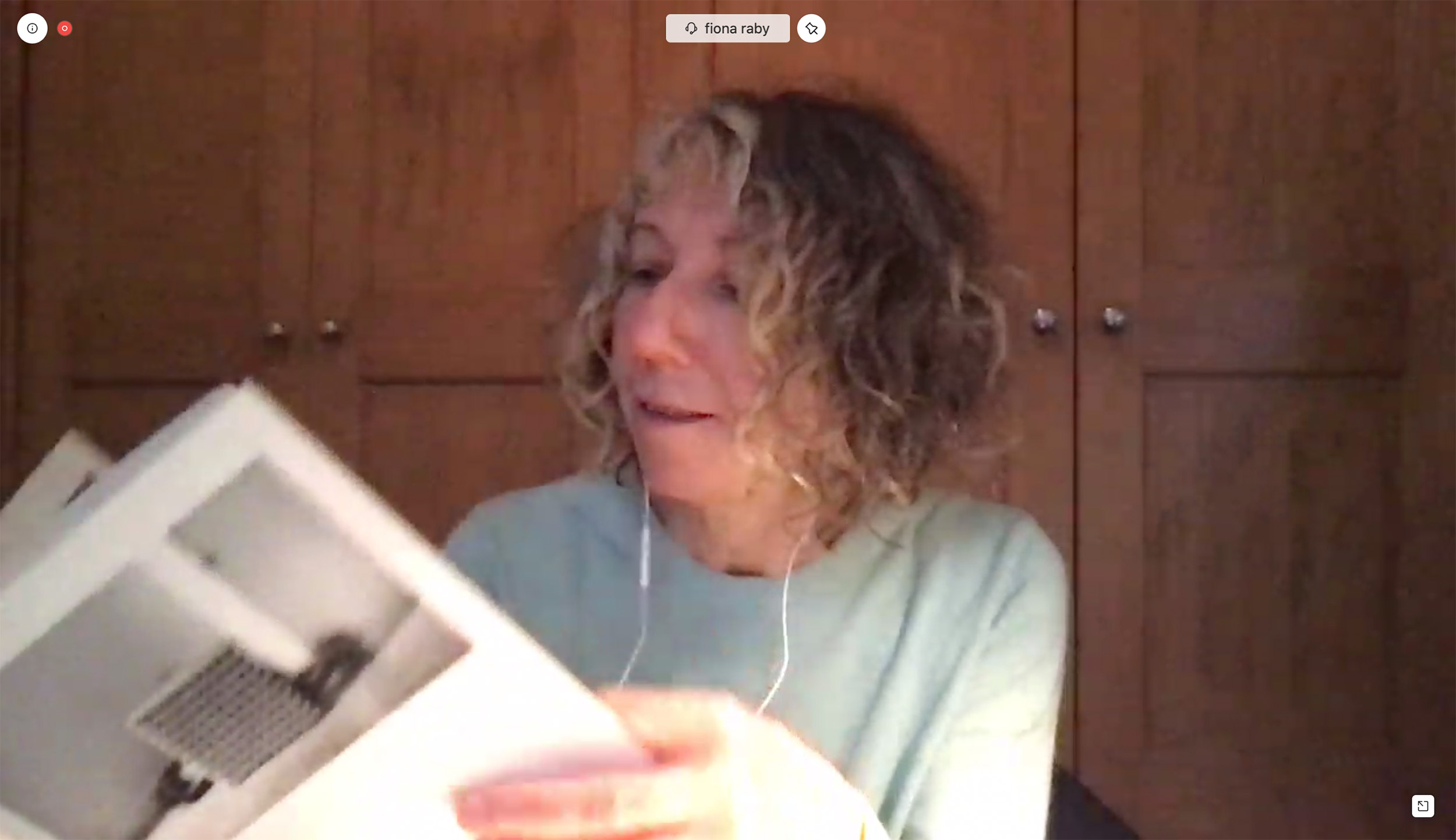 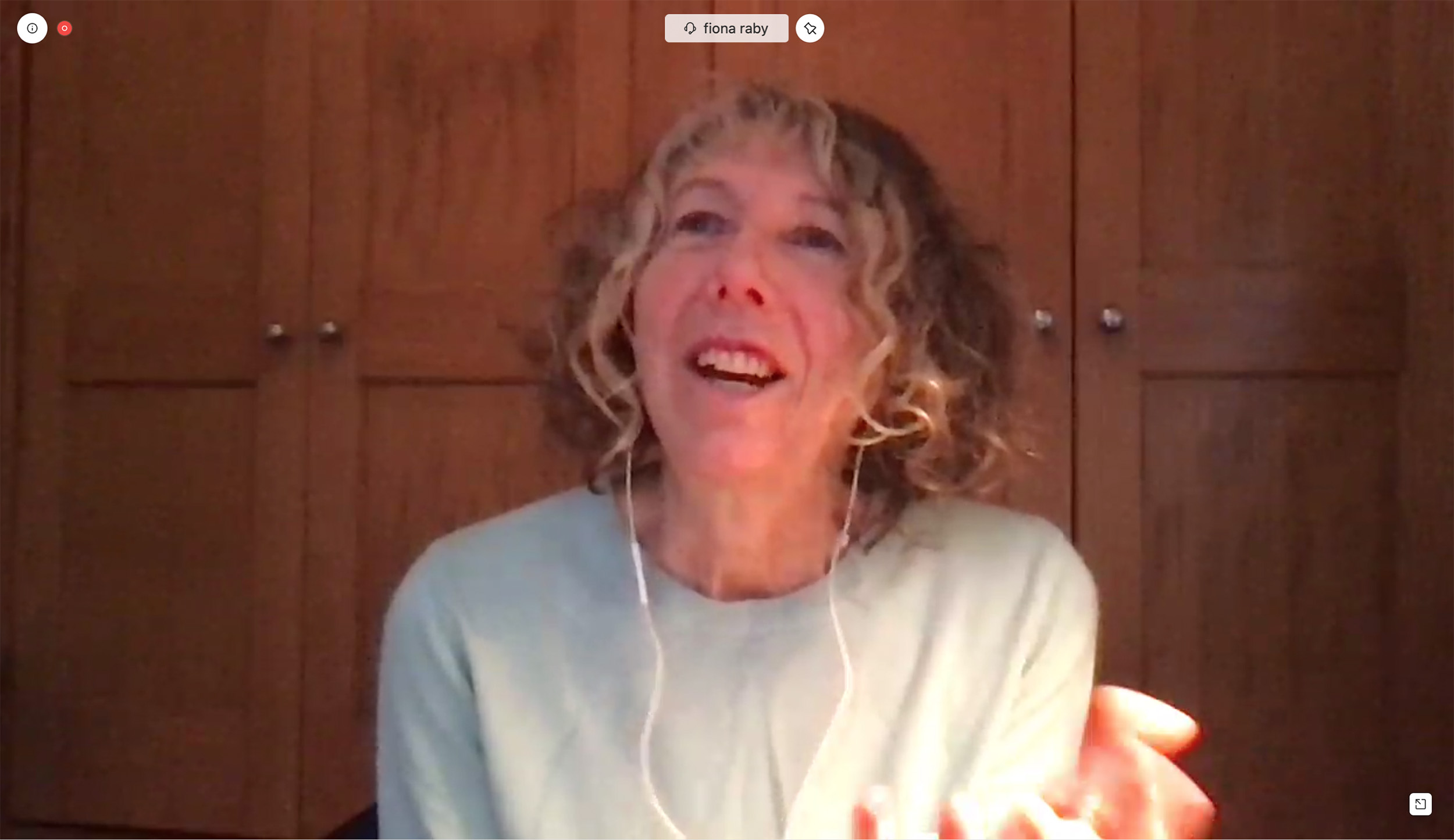 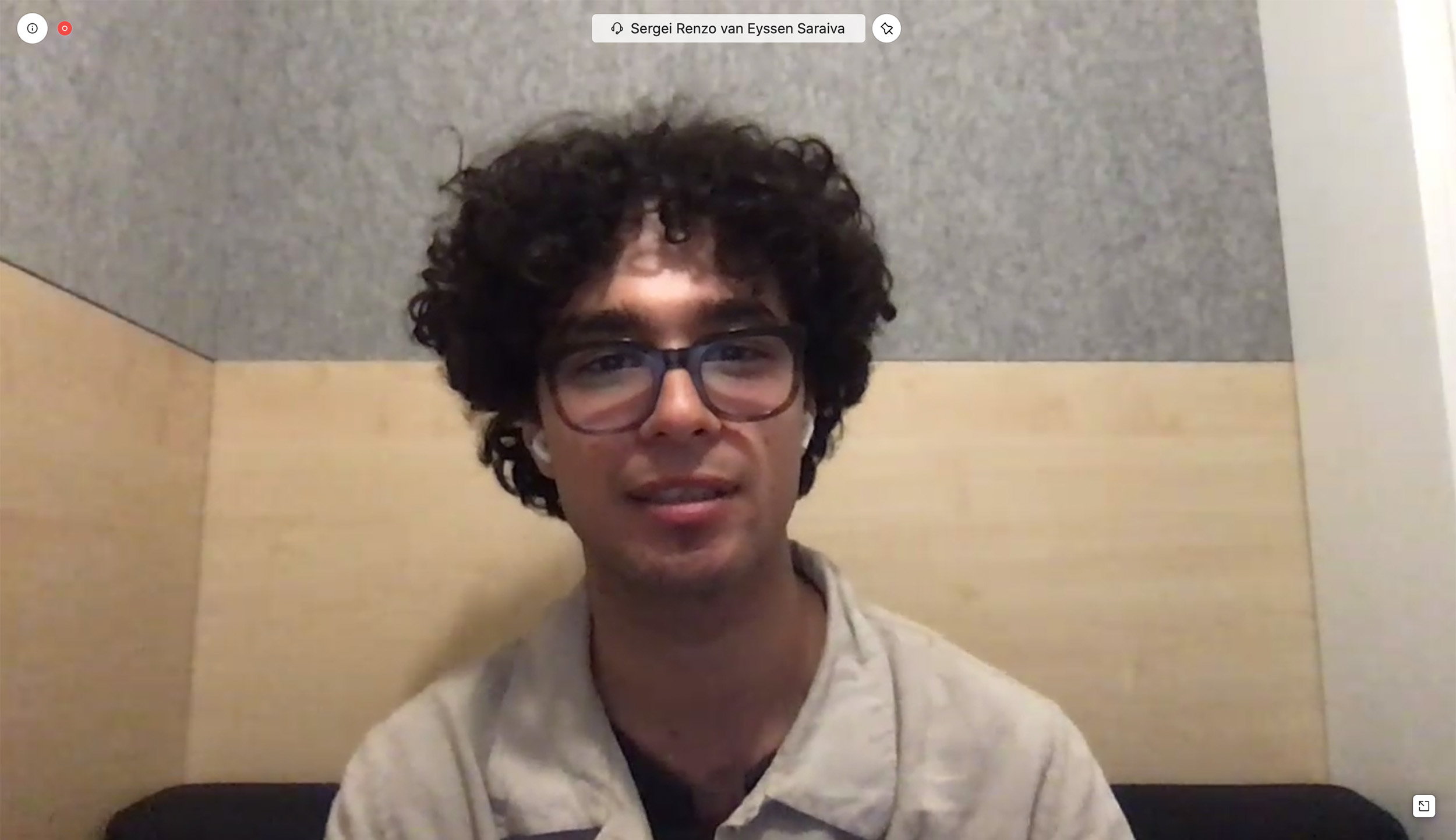 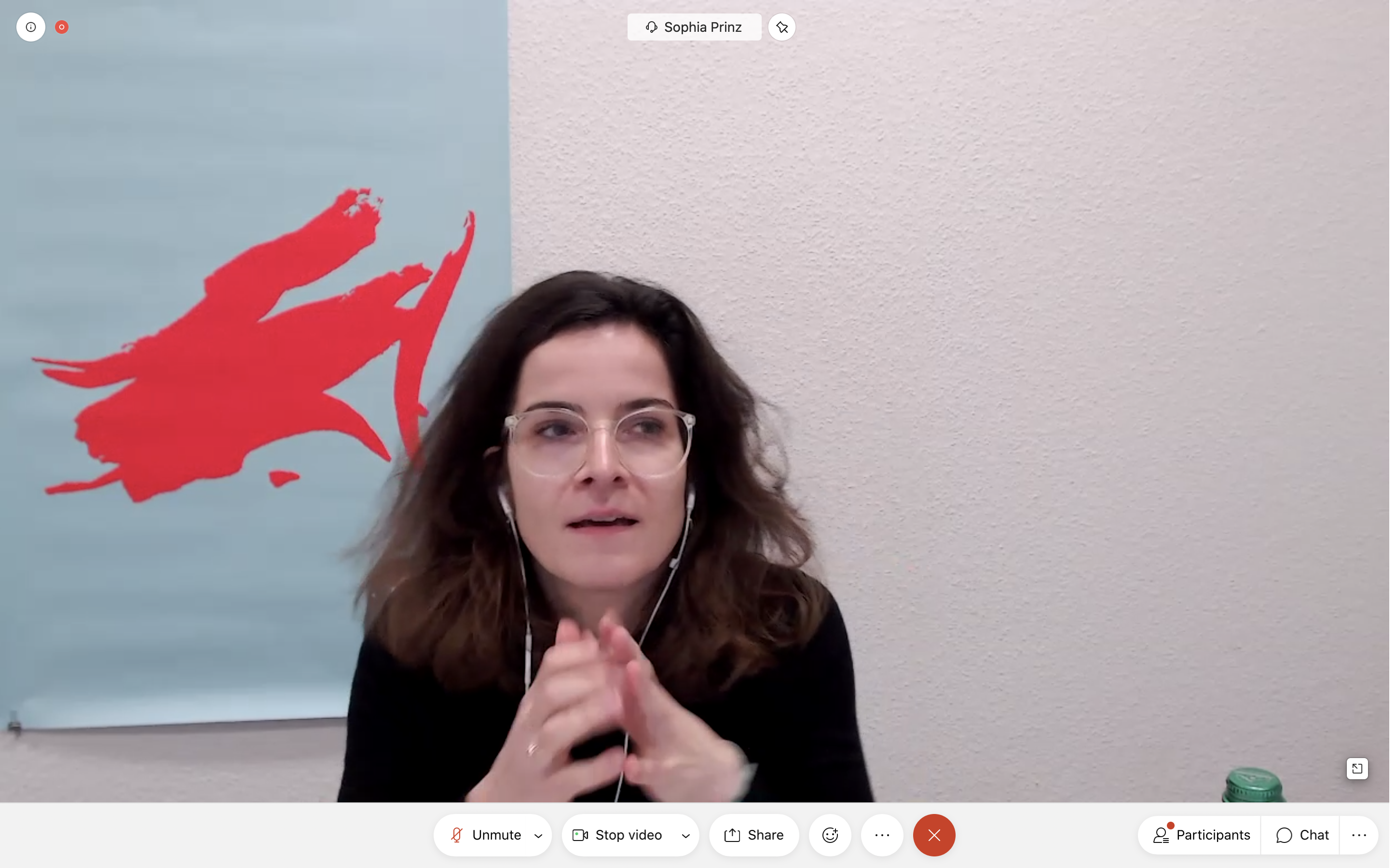 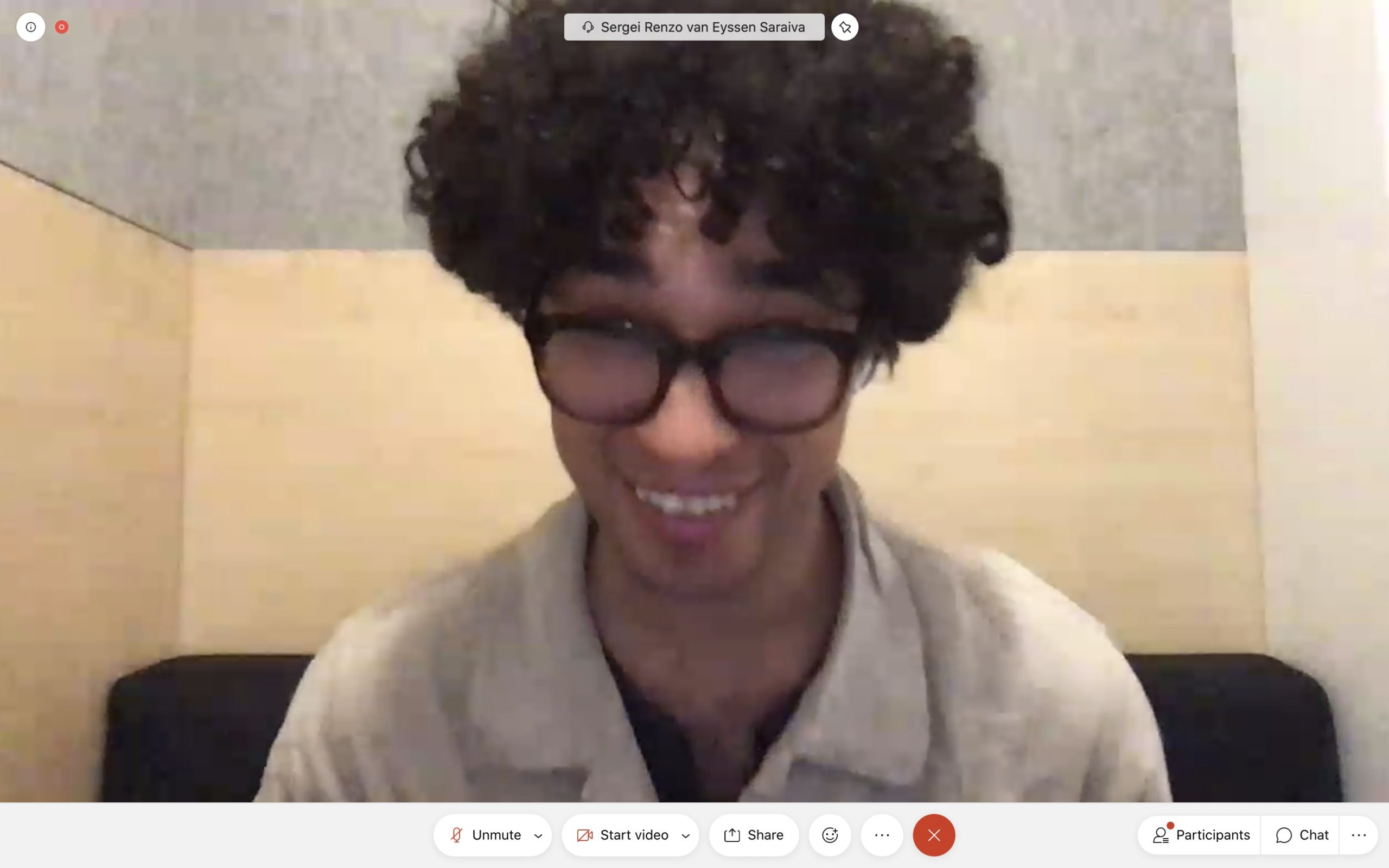 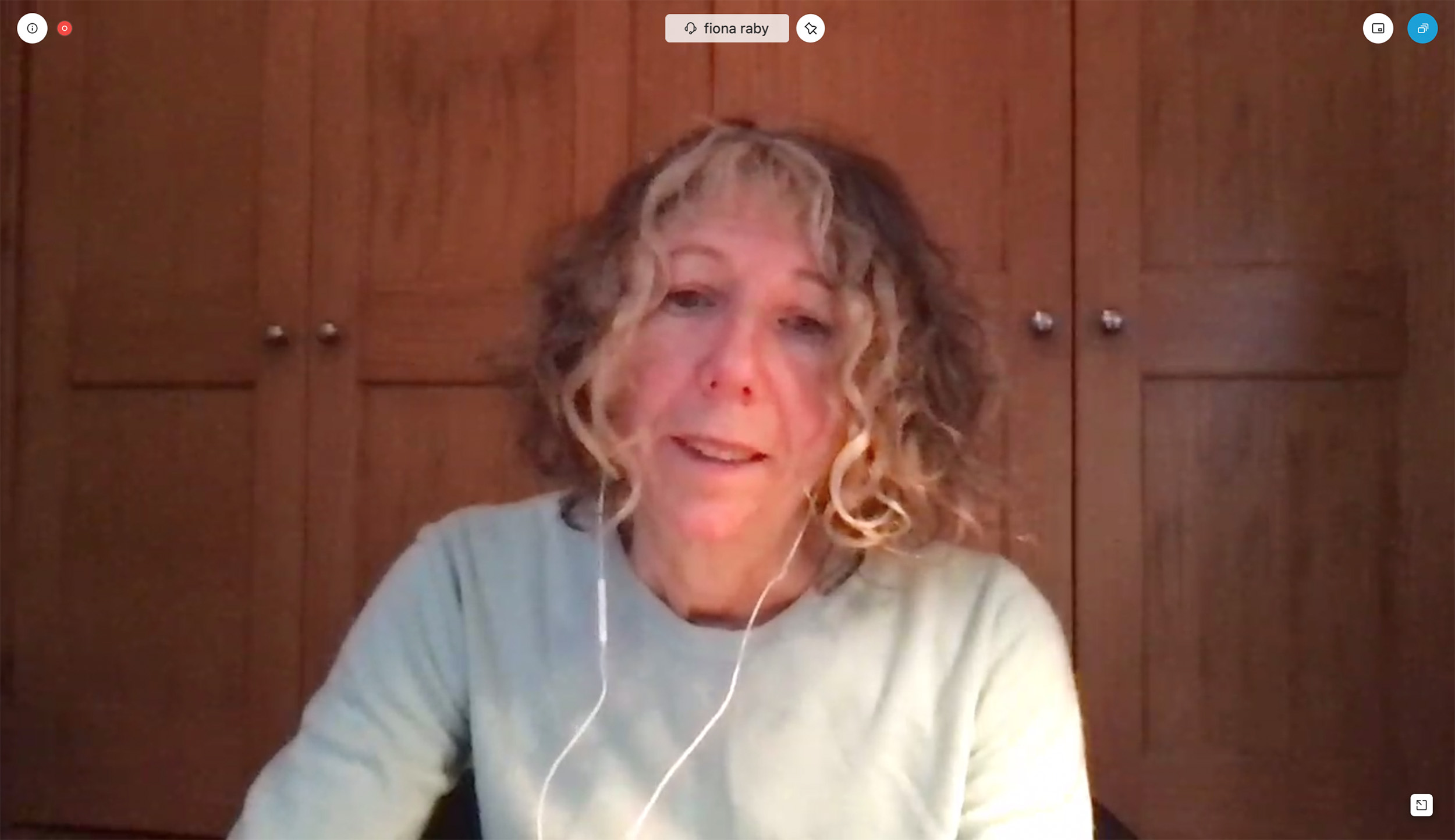 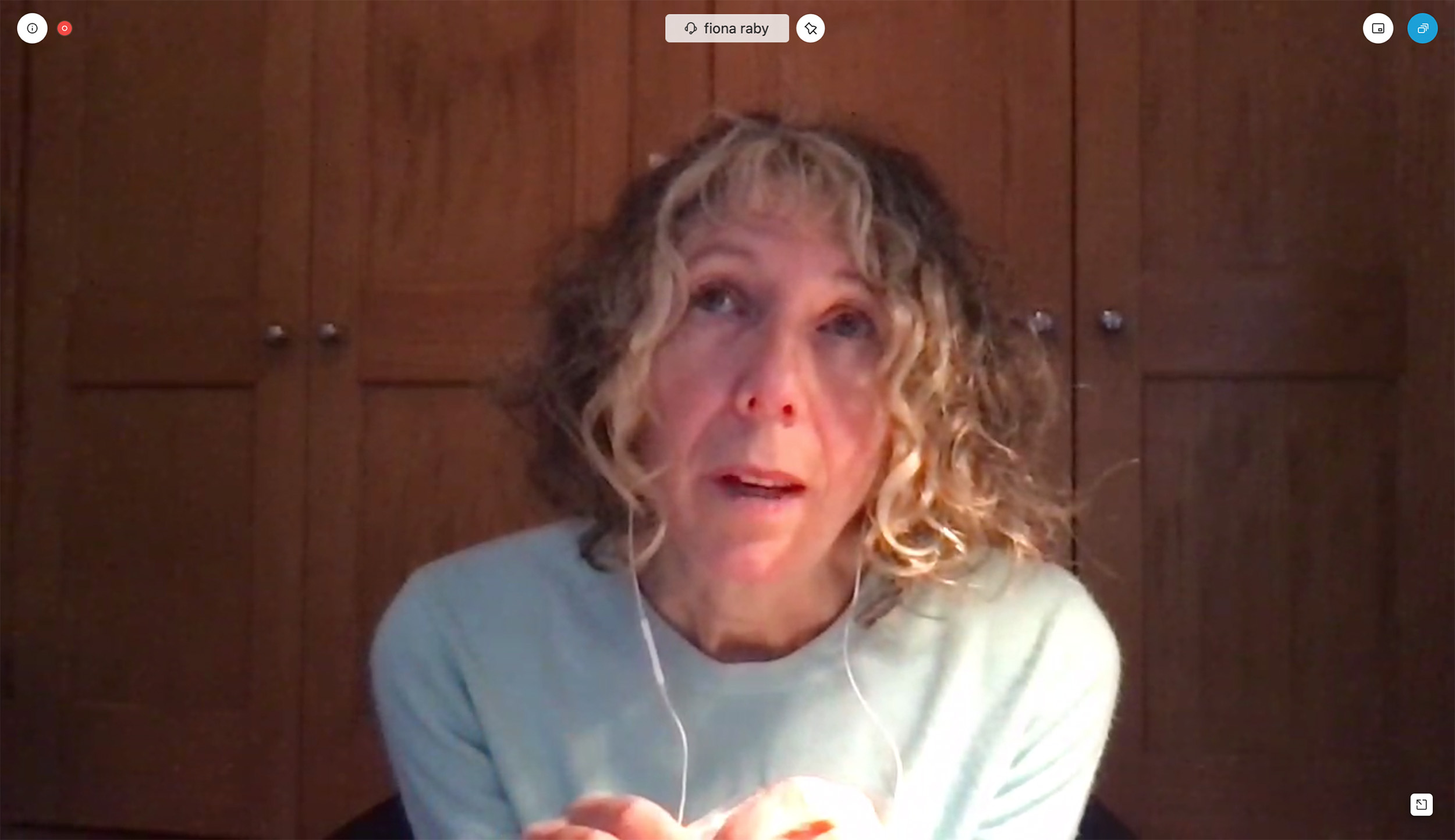 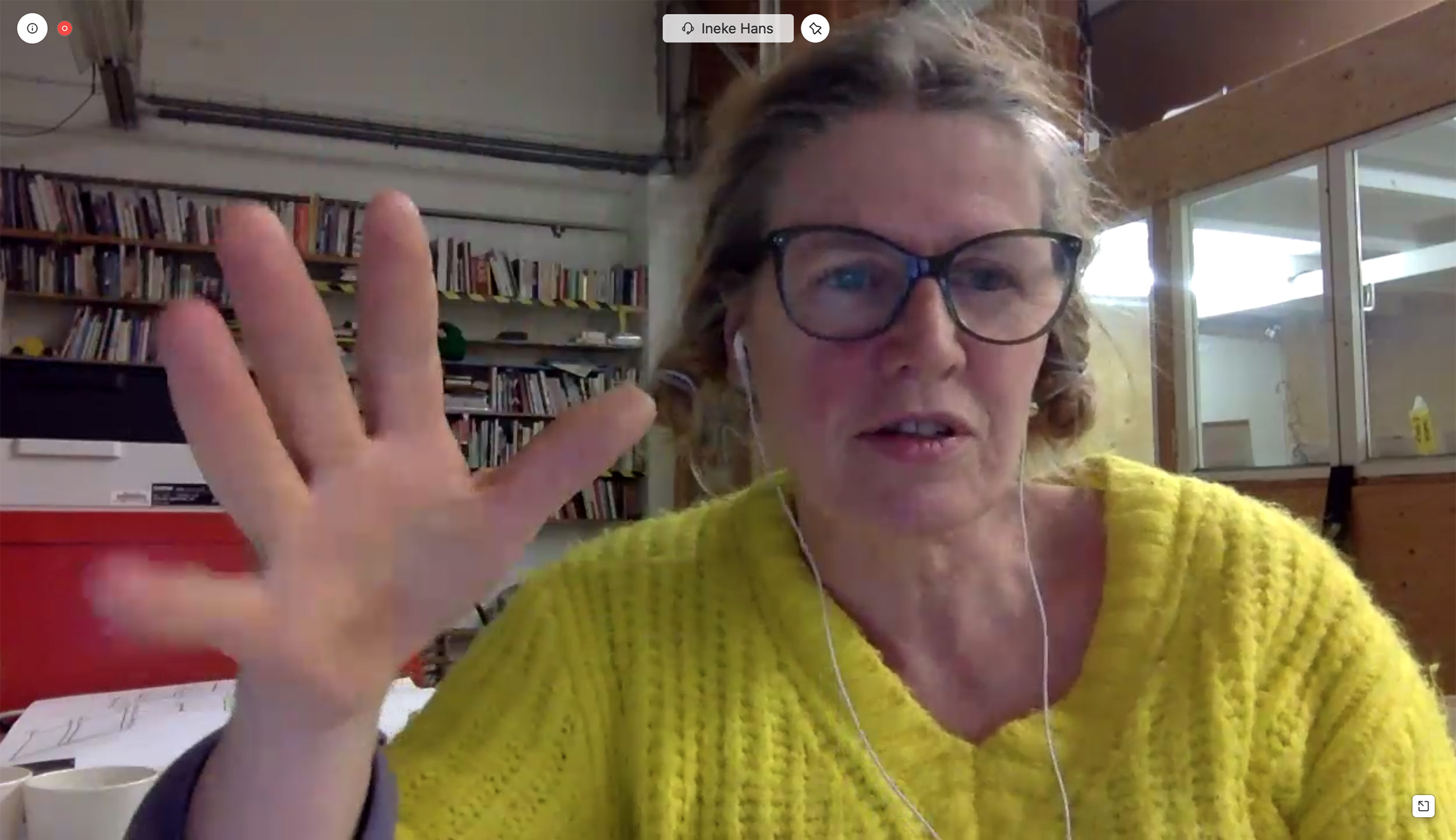 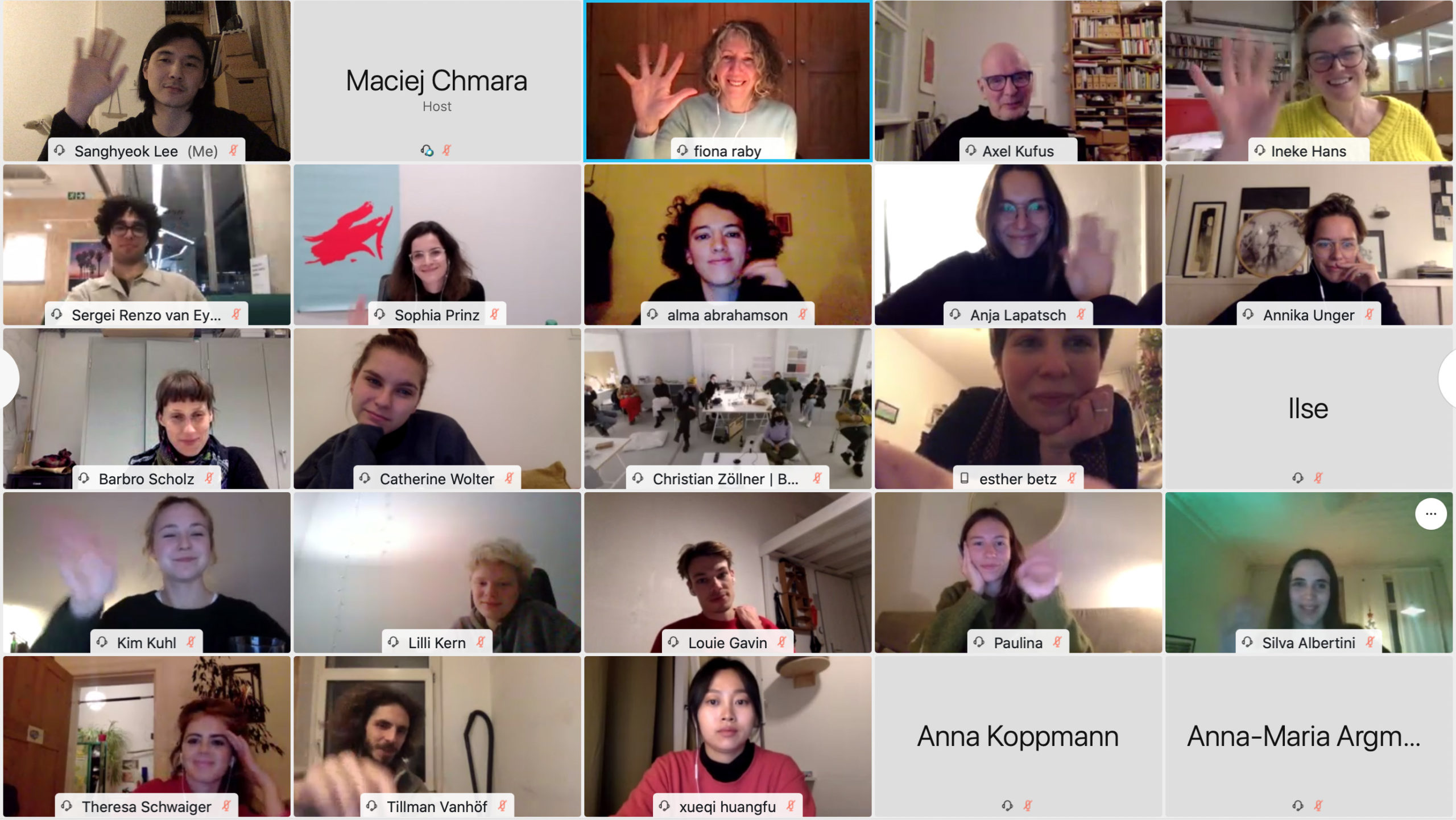 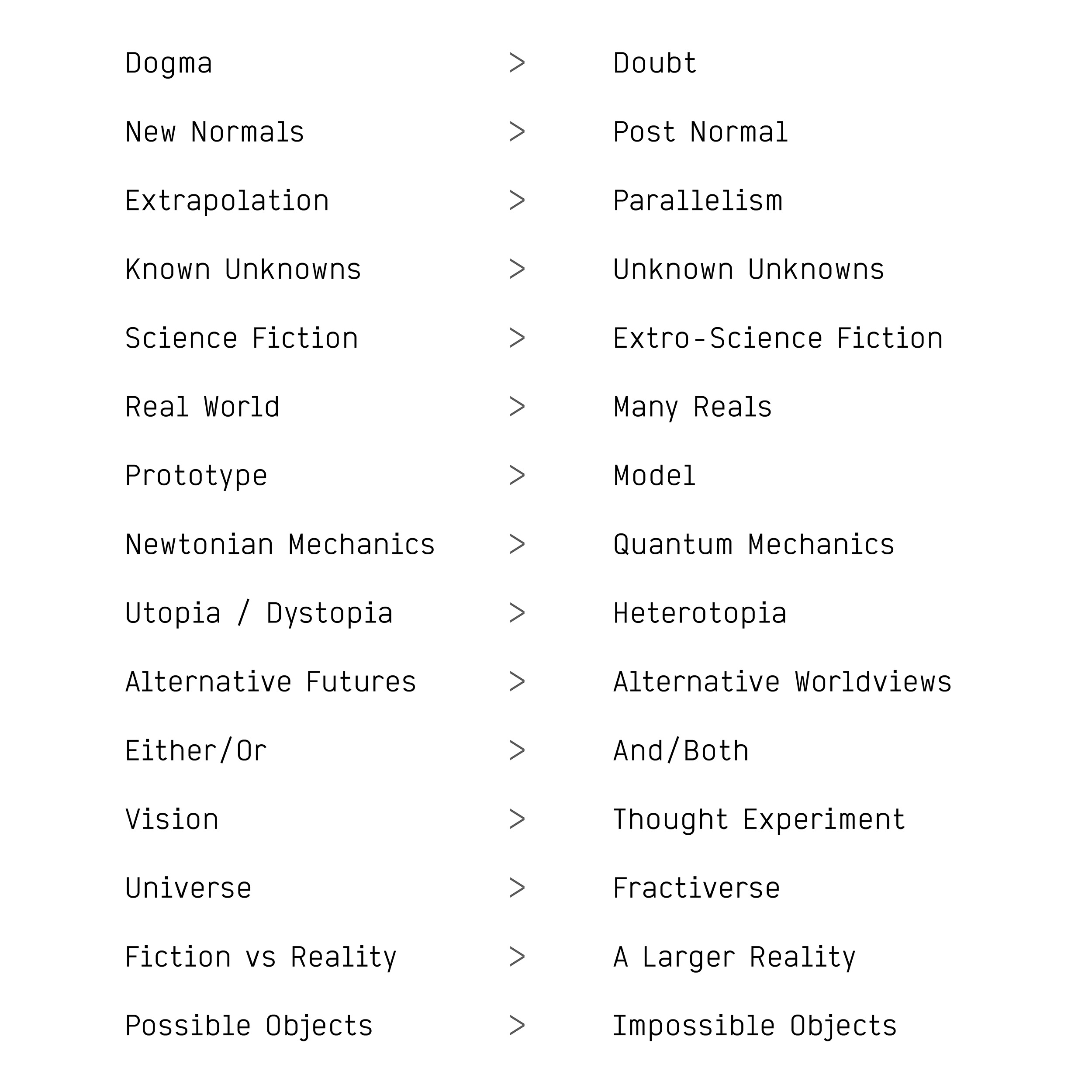 What and interesting talk with Fiona Raby, full of input!
Fiona Raby and Anthony Dunne from Dunne & Raby are propably the “godfathers of speculative design” provocing different ways of thinking about the relativity of our reality and future.
Working 30 years together with Anthony Dunne, Fiona pointed out that it’s hard to speak for herself why she will talk for Anthony and her both.

Their Kairos has been more like a longer lasting ‘moment’. It was their 3 years stay in Tokyo, Japan, when they left college in 1988. The there so different world and attitude towards technology ‘shifted [their] world in a big way’ and has had not only a profound effect on their then following work but even on what they do now.
Coming from a world, the UK, where technology is seen as something controlling, they experienced technology in Tokyo as something delightful and with pleasure. This, they wanted to turn into something of their ownwhen they went back to the UK and thought about it within their familiar context.

From then on they were falling between disciplines, says Fiona. Not really industrial design, nor architecture, nor graphics. They started a computer related design course in 1991. Even that they were interested in technologies then, they felt like misfits and as if they wouldn’t quite fit in. ‘It was a funny course’, she said having done it with a real mixture of people from different departments who were all, kind of working in the technological space.

The object this week was quite interesting for us participants to bring with: An object that allows you to see/experience something invisible! That’s why there were a huge range of different objects in our webex gathering, which all understood visible and invisible in different ways – book, heart, thermometer, sleeping mask, glasses, …
Unfortunately, Fiona hadn’t got her object with her in New York because it is located in London. But she sent us a link to her radioscanner, she bought it at a shop after coming back from Japan. She said it was fascinating to have had the possibility to tune into a really different world of all kind of signals in the air.
Through this, they wanted to think about smart objects and it also led to an early book and project, the ‘placebo project’.

Fiona told that after having worked as research fellows, she and Tony started teaching and working with a range of digital companies, they are still falling between the gaps today, in this in between space. ‘We sit in this funny world between institutions, academia and practice, this space in between all of these things.’. They see their work as a research in design, to push boundaries of what design could be and how technology fits into this.

Their famous book ‘Speculative Design’ marks the 10 years they spent at Design Interactions the mastercourse they ran at the RCA trying to understand biotechnology.
‘But you can’t make these biological things!’, said Fiona. So the book is about how can we make things that don’t exist? how can we show that they exist? And how to speculate on if this technology is getting developped? What would the everyday life would be like with this lense of technology?

Then Fiona talked about the power of models and prototypes. Perhaps their background as architects has fed this too, but in design you usually work on 1:1 prototypes. An interesting point, Fiona pointed out, is that a 1:1 scale automatically assumes that it is real and that it exists in a real world. But sometimes you make an object that has no connection with the real world but it is used to talk about that world that it is supposed to be in. For this, they love using models.

In doing so, Fiona mentions that they ask themselves what is the value of the conceptual way of thinking? It is about using design to ask questions and create discussions?! As soon as an object exists in a 3 dimensional space, it becomes a very powerful tool to talk about things that don’t exist yet. But there is also a lot of research behind this! ‘If you don’t have that research and don’t know your facts, it’s very difficult to make a powerful piece of design that challenges!’

During the discussion, Axel and Fiona also adressed the multiple realites which we experience today, especially in the crisis. Fiona asked herself how to work with this kind of space. She thinks it is kind of fascinating and what design does – working with multiple viewpoints. Axel wondered if it would be good to create an inflation by creating more and more narratives, so people have more possibilities following things. Fiona responded that there already is ‘more and more’, but they are all in the same kind of space why it is important to step outside the unknown world and do something completely different.

This led over to the topic of their new book: How to explore the unknown? It is half way writing and still needs time until being published, but it builds on the work they already did.
In the context of the book, they are interested in what is impossible and why is it impossible? They also analyse belief systems from the past and present. Now, there is not anymore the certainty about technology that saves us, we are living in a world of contradiction.
‘It is a lovely balance between the rational and the irrational.’ Finding the balance through lightness, sensitivity and by using the synthesis in a world of multiple realities can be seen as a classic design task. Fiona emphazises that ‘This is a real struggle […] but who said design is easy?’

In the last part of the discussion we talked about the role of speculative design in a context of a world and society that feel real problems.
Fiona said that design is not gonna save us, but it can help us when having other ingredients like other institutions. We have to keep in mind the picture of an ecology: Each little piece can help the bigger picture and design is one piece of the ecology – people use structures of design to shape the world: thinking outside, thinking broader, seeing another perspective.

And another thing Fiona has learned and what concluded the talk nicely: People want to have bigger dreams and dreams about what it could be. Speculative design pushes the dream further by pushing to edges and expanding realities.