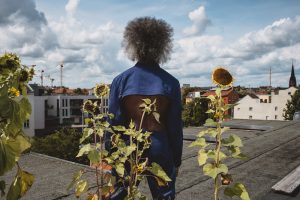 Originally from Trieste, Italy, Alessandro Gentile was one of the graduates from Univeristät der Künste’s Schau21, who captivated our attention. Unlike most designers, Alessandro’s calling to fashion wasn’t the most intuitive. With a passion for science and technology, he had initially set out to study Biology and Healthcare whilst back in his homeland. Although he admits that during his studies he observed his fascination for the two growing, he simultaneously came to terms with the fact that it wasn’t his be-all and end-all. It may have taken Alessandro a while to find his calling, but from his creations, it’s clear that he is certainly on the right path. We caught up with him after the show to talk about his BA graduate collection “SELECT MASCULINITY”.